Saturday 11th August, one of the few that’s felt like a real summer day, saw the successful completion of another ‘Big Swim’ to Llansteffan and back in support of the Ferryside Lifeboat. This is a serious and challenging open water swim event covering a distance of 2 kilometers and marked out by 3 buoys across the Towy estuary. 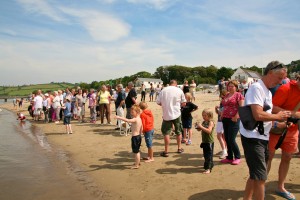 Fifteen hardy souls braved what appeared to be relatively favourable weather, but the calm on the Ferryside shoreline was deceptive with choppy conditions near LLansteffan and the increasing Easterly breeze making the return leg much harder work. Every swimmer looked tired and relieved to make it back to shore. To minimize the impact of the tide, they set out at 1pm, with the first returning in just over twenty-two minutes and all back before 2pm. 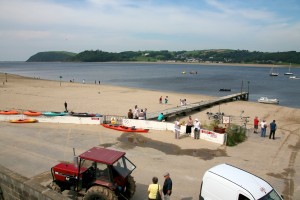 Safety is paramount and there was a great deal of advanced organisation to try to cover all eventualities, and to provide full support for the swimmers at all stages of their swim. A team of kayakers from Gwendraeth Valley Paddlers provided close support and direct communications to the swimmers, with four volunteer boats, each carrying a member of the lifeboat crew and a diver from the Carmarthen Bay Divers as the next line forming a safe corridor there and back for those in the water. Two high-speed boats were stationed to head off and intercept any other craft that might have inadvertently strayed towards the line of swimmers and further members of the lifeboat crew were positioned to keep an overall watchful view and on the beaches. 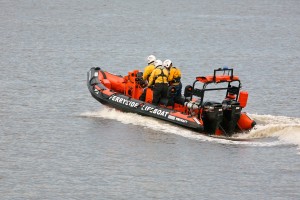 Despite all the planning, events can confound and the lifeboat was called out late morning in support of the rescue of seven persons trapped on mud banks at Laugharne, highlighting the very reason why the Big Swim was taking place. 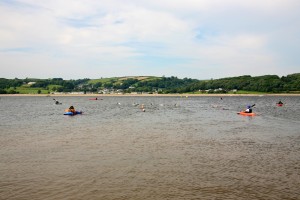 However the event was still able to start on time, with 14 swimmers taking to the water moments before a cannon fired from the foreshore – the final swimmer turned out to be slightly delayed changing and gamely joined the others four minutes after the start and headed off after them. 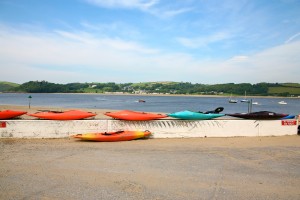 Hoards of onlookers crowded the shoreline near where the swimmers set out and cheered each one as they returned home – the first swimmer back was even greeted in the water by a frequent visitor to the beach in Ferryside, a friendly dog! 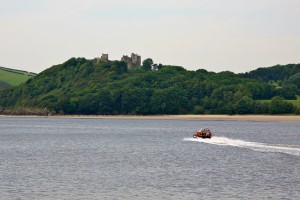 Festivities ensued afterwards in typical Ferryside summer fashion with a barbeque outside the yacht club and two bars staffed inside with the kitchen supplementing the regular bar to help it all run smoothly. The whole event was rounded off with music from Runaway Brian and Jon & Matt and a raffle of donated prizes again in support of the Ferryside lifeboat. 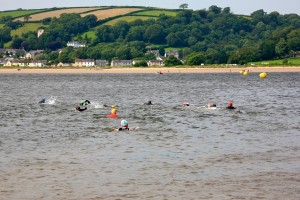 Thanks to all for their support in making this such a fun, exhausting, charitable and above all, safe, event. 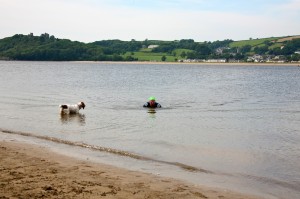 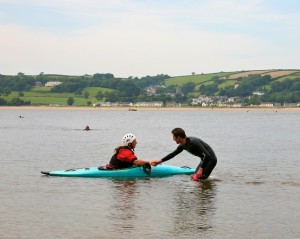